Sylvia is dedicated and passionate about inspiring and empowering you to cook and eat well using fresh local seasonal produce.

Learn lifelong and life-changing food and cooking skills. Gain confidence and culinary inspiration that is personally satisfying. Improve your life to a new level of good health, enjoyment and happiness.

Sylvia is a passionate intuitive self-taught Chef, qualified Food and Wine Tutor, Recipe Developer, Food Stylist and Writer with decades of professional experience in restaurants, catering and teaching cooking classes. She is also a keen Gardener and ‘Culinary Alchemist’ (read developer of culinary creativeness) with a love of food and cooking since she was a little girl.

In January 2007 Sylvia established her home-style hands-on cooking school. Since then has been teaching food and cooking to eager students. She simultaneously ran a diverse range of highly popular cooking classes through Adult Education Launceston and also coaches cooking in private one-on-one classes in people’s own homes. Sylvia also produces artisan gourmet products.

For many years she has been assisting people to achieve their full potential in the kitchen by teaching cooking skills that have transformed their lives for the better forever. You can read testimonials that attest to this here.

Sylvia has a rich European family heritage enhanced through travel with professional and personal multi-cultural culinary experiences. She has extensive hospitality experience. Mentored, trained and cooked with well known chefs in Adelaide and overseas.

Sylvia wanted to leave her corporate career to live her dream. In July 1995 she was offered Sous Chef position at Antonio Carluccio’s London Neal Street Restaurant. At the same time another opportunity presented itself. A difficult decision had to be made. Sylvia chose to work together as a couple with her husband to co-manage the boutique hotel and restaurant, The Peacock Inn, Chelsworth, Suffolk in the English countryside. It was a leap of faith for them both. They chose to change careers. The Peacock Inn became a very successful restaurant. Inspired by the rural region, Sylvia created beautifully simple dishes for their eclectic daily ‘blackboard’ menus using fresh local seasonal produce and conducted cooking classes between services.

In the 1980s Sylvia owned and operated a successful home-based catering business, Cuisine de Artiste, and consulted and cooked in well-established cafés, bistros and restaurants both in Australia and overseas. She had a diverse corporate career, prepared the marketing plan and assisted in the proposed establishment of the Adelaide Central Market cooking school.

She has been cooking since she was a child and could reach the kitchen bench top. (Photo below: Sylvia on her second birthday. Can’t keep her hands off of food!). At five years of age, she prepared handmade pasta, chicken stock, pastry, cakes, pizza, breads and all manner of European dishes with her grandmother who was the first to mentor her in the importance of good food and sharing. Sylvia has a vast knowledge of food and experience in a broad range of cultures and styles both in Australia and overseas. Her classes and daily cooking are influenced by fresh local seasonal produce used in multi-cultural ways. Her love of good food, travel and work with food, a library of culinary, food science, cultural and historical literature, and love of life and people continually inspire her. 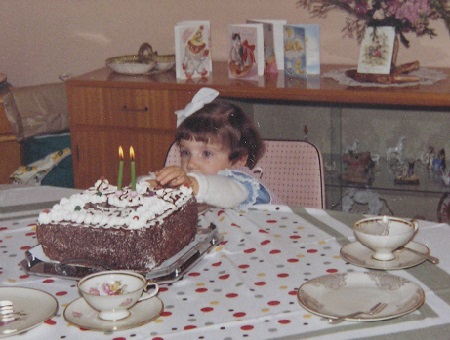 In 1988 Sylvia was fortunate to be chosen to be part of a small team to participate in “Australian Cuisine”, a unique culinary study of “The development of Australian society from a diverse multicultural background and the consequential influences on Australian cuisine.” It was orchestrated by Master Chef Cheong Liew OAM of Neddy’s and The Grange restaurant Hilton Hotel Adelaide. This included cooking with Maggie Beer, Janet Jeffs, Tuomono Wynn and other well-known chefs, cooks and regional producers. An extraordinary exploration into food and highly memorable intellectual culinary experience that also incorporated the study and cooking of Cheong Liew’s masterful dishes.

Some of Sylvia’s mentors include Cath Kerry of The Adelaide Art Gallery Restaurant (she spent hours with Cath in the board room kitchen of Orlando Wines rather than at her desk!). The late Brigita Whiting (Turniski) of Mona Lisa’s Bistro and Café Instanbul, Adelaide where in the late 1980s Sylvia undertook a ‘culinary internship’ and worked dinner service in the kitchen after her day at the office!

Australian and overseas work and influences together with all the above, include Terry Owen and Susan Moore of Ruby’s Café, Stephanie Alexander, Cherry Ripe, Vic Cherikoff, Christine Manfield (who worked at Ruby’s Café), Greg Malouf, Larkin Warren of Martha’s Vineyard Restaurant, Chris Chown of Plas Bodegroes, Alastair Little, Ann and Franco Taruschio of The Walnut Tree, Rose Gray and Ruth Rogers of The River Café and many more with whom Sylvia has had the pleasure to work, converse, cook and dine with.

It is her husband to whom she is most grateful, who always provides encouragement and inspiration. He is a successful Scientist, Analytical Chemist, Glass Artist and also a fabulous Cook! Who says:

“Without food there is no life, therefore the greatest gift you can give someone is good food.“

Together they share a rich journey of travel, culture, art, music, food and wine, which is central to their life, so much so, they married at Colin and Maggie Beer’s Pheasant Farm restaurant in the Barossa Valley